When I hear people talking about how they got online for the first time they often mention dial-up modems or expensive connections over landline phone lines. My story is somewhat different.

I heard of the Internet for the first time when I was a child. It was this big thing that sparked my imagination at the very moment I heard of it.

But things needed time to click together. Even though I had a PC since 1998, my parents weren't eager to buy a dial-up modem. I'm pretty sure they knew connections were expensive and the phone couldn't be used while being online.

The other place I could try this great new "Internet" thing was a computer lab in my school. If I remember correctly, it used a single dial-up modem to bring 15 computers online. I distinctively remember that characteristic sound of dialling up. We had to wait a few more years to switch to unlimited broadband. Until then our fun time was strictly limited and counted in minutes.

According to PC magazines I've been reading at the time, internet cafés in my country have been a thing since at least mid-90s. But I had to wait until 2001 to see one in my home town. When it finally happened, it felt like a huge deal to me. I was super excited to give it a shot. 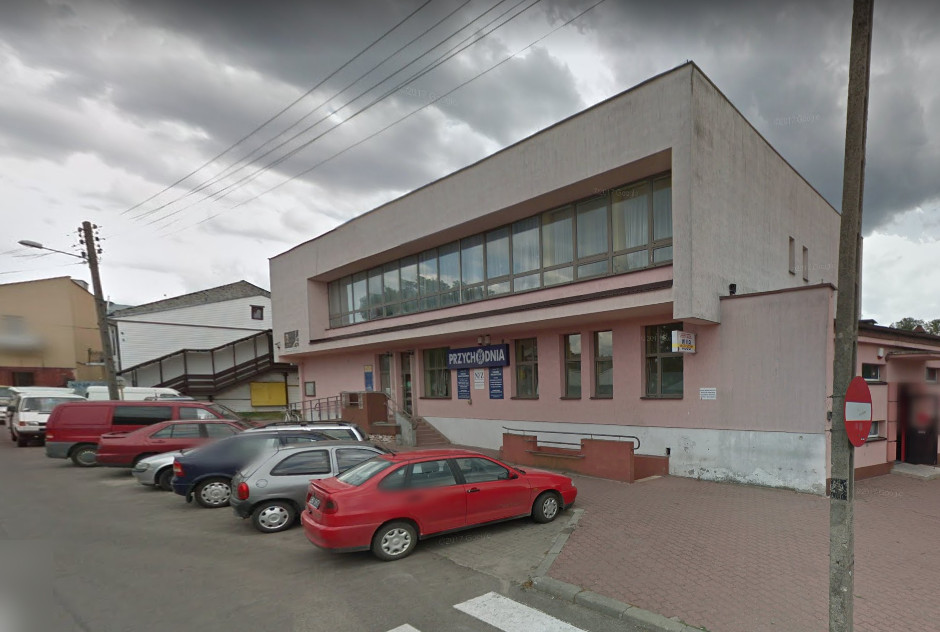 What was waiting down the stairs was a dimly lighted room with ordinary desks and cheap chairs. Each desk had a computer, and all computers were connected to a local network. Whenever I entered the place I could hear this particular song. Other time somebody would loop Rock the Discothek by Prezioso. Those two tracks got stuck in my head forever.

But I wasn't there for first-person shooters or spontaneous LAN parties. Computers at the internet café were, well, connected to the Internet. This new exciting medium to explore, right in front of me. This magical "cyberspace" I've been hearing a lot on TV. Except now I no longer had to deal with dial-up modems and expensive metered connections.

I paid for computer hours with my pocket money and I cherished every minute. I could afford a few hours a week, which was plenty, but never enough. Plus I had to get back home for dinner and homework.

My StarCraft-loving audience of 2020 could compare internet cafés to PC bangs in South Korea but I'm not sure about this. Yeah, competitive skill-based games were a thing just like everywhere else, but I don't think anyone in my teenage filter bubble played them to compete. We played games for fun and there was no deep rationale behind this. TV channels didn't broadcast video game matches in the evenings, so we weren't even dreaming of esport tournaments. Being a bunch of teenagers with few responsibilities in our lives, we were jus having fun. Simple as that.

The Internet of early 2000s was a vivid space full of interesting things. Honestly, I don't think it differed that much from the Internet of 2020 if we exclude technological limitations.

More importantly though, there were still valid reasons to call the internet cyberspace and think of it as an alternative dimension rather than augmentation of our daily lives. What happened online stayed online. News on TV rarely mentioned politicians or celebrities doing stupid stuff on the Internet. I had pen friends I met on chat rooms and we were sending hand-written letters to each other because internet access was still too limiting to us.

Also, there was a very clear distinction between people we met in 'real life' and people we met 'online' as if the latter were some alien race. My parents never said 'yes' whenever I wanted to meet someone from the internet in real life.

Life without the internet was still possible.

I'm too lazy to consult Wayback Machine about exact dates even though I still remember URLs of my first websites and discussion groups I participated in. But I conveniently keep saying all cool things started in June 2001.

In June 2001 I accidentally watched VIVA and discovered club music. In June 2001 I got my first mobile phone for my own pocket money. But most importantly, somewhere around June 2001 I discovered true potential of the Internet and started exploring how websites were made.

Learning about computers at school I had a chance to sign up for a free web hosting account and upload my poorly baked homepage via FTP to the Internet. I couldn't shake off a feeling this was much bigger deal than it was but I struggled to make sense of it. It's hard to rationalize about revolutionary ideas when you have schoolwork to do.

In the meantime, one of my classmates showed me his website about a well-known game franchise. For a fun after-school project it looked impressive and I was a little jealous. I found this program called Microsoft FrontPage and I quickly realized the whole process was fairly easy to start. Even better, I didn't have to be a skilled designer to build a pretty website. I could use one of thousands of premade web templates as a starting point and I focus on content.

June 2001 was the time I got my first mobile phone, Motorola V2288 with a prepaid plan that charged an arm and a leg for every call or text message. Apart from calls and texts, as well as prehistoric take on mobile internet called WAP, it also offered an option to compose one's own ringtone. In the era when mobile phones were primitive generic devices with monochromatic tiny displays, being able to set up your own ringtone was a serious deal and a lot of businesses were built on top of that.

I found out I could easily compose my own ringtones and they could be sent to anyone free of charge via SMS gateways offered by mobile carriers. My website was a collection of those ringtones together with instructions explaining how to send them to one's device.

Between 2001 and 2003 I composed several hundreds of ringtones. Being an avid watcher of Viva and MTV2 Pop, I was capable of keeping tabs on current music and churning new ringtones at a fairly quick pace, offering much wider selection than any other website available at that time. 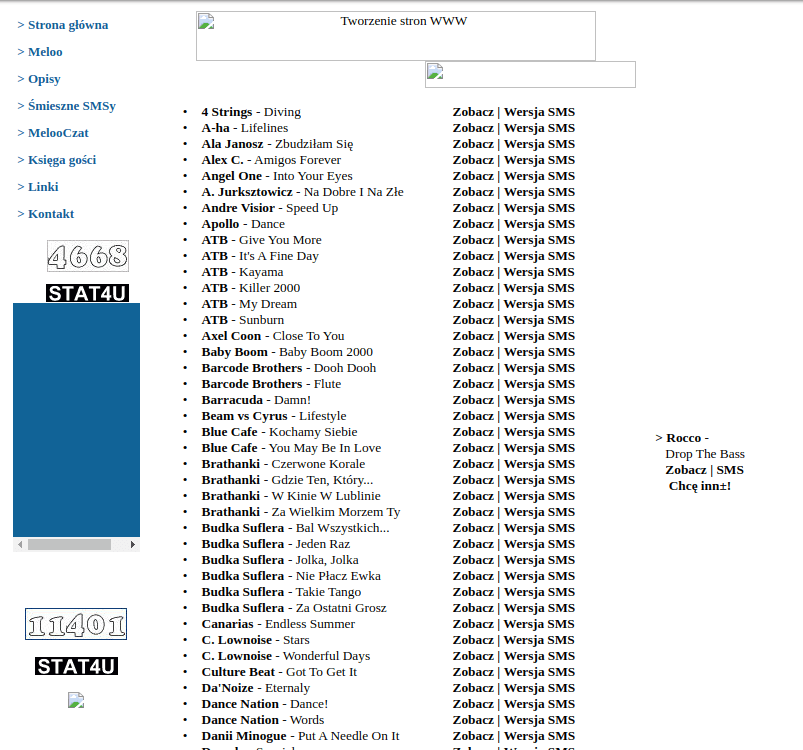 Oh, and one more thing. I'm not exactly proud of this but I supplemented my collection with several hundred ringtones from other sources. That means I copied them to my website without asking for permission. One of their owners noticed that and, uhm, he let me know he wasn't happy. I'm not proud of this, but hey, I was a clueless teenager. At that time I knew nobody who could explain how intellectual property works on the internet, okay?

For most of the time I was still working in WYSIWYG mode in Microsoft FrontPage. I quickly learnt about its limitations when I wanted to add a JavaScript snippet or remove unwanted artifacts messing with site layout. So I started to switch to 'Code' tab more and more often.

I was fixing things via trial and error long before I knew these funny languages were called 'HTML' and 'JavaScript'. Once done, I'd bring my website to the internet café on a few floppy disks and upload it using Windows Commander to my free hosting account.

And this became my routine for at least 2 more years: make updates at home, copy files to a floppy, go to the internet café, upload stuff, done. Rinse and repeat once a month. According to Web Archive I was providing regular updates up to June 2003, though some subpages seem to have survived up to 2004.

My website died in a rather anticlimatic way. I forgot to remove my FTP credentials from the computer in the café. As a result, someone defaced my website with a warning not to leave saved FTP credentials on a shared computer. I never managed to get my website back online.

Floppy disks I used to transport the website to the café survived to 2020 but data recovery software failed to extract anything of interest. In April 2020 I discarded them. No regrets.

My new superpower of building and putting stuff online proved to be useful sooner than I expected. I no longer had to care about computer lessons in any school or university I attended. I quickly gained reputation of this nerdy guy that knows computers.

Despite twists and turns in my life I kept my interest in the internet alive. Thanks to that I was able to land my first job in IT industry, move out of my sleepy home town and start a new exciting chapter in life.

I don't know what happened to the internet café in my home town. I'm pretty sure it stopped being a profitable business as soon as local internet providers started offering affordable broadband access.

What happened after 2005 was the Luke the Blogger era. I learnt PHP and WordPress, purchased my first domain name, started paying for web hosting, met a lot of like-minded people in the blogosphere. Quite a few of them are still in my contact list as of 2020. But believe me, this doesn't warrant an interesting article unless you want to read an old man reminiscing about good old days and complaining about bad new days. Nah. Gotta move on.